Of the 14 gonfalons, three of the fishtail ensigns plus the Hofstra seal were first presented in University ceremonies during the dedication of the Hofstra Library in 1967. The gonfalon for the Maurice A. Deane School of Law was added in 1970, followed by the Hofstra University Libraries gonfalon in 1993, The Lawrence Herbert School of Communication gonfalon in 1996, the Stuart and Nancy Rabinowitz Honors College gonfalon in 2001, the Donald and Barbara Zucker School of Medicine at Hofstra/Northwell gonfalon in 2009, and the Fred DeMatteis School of Engineering and Applied Science and the School of Health Professions and Human Services gonfalons, both dedicated in 2013. The gonfalons of the Hofstra Northwell School of Nursing and Physician Assistant Studies; Peter S. Kalikow School of Government, Public Policy and International Affairs; School of Natural Sciences and Mathematics; and School of Humanities, Fine and Performing Arts were dedicated in 2015.

The history of the ceremonial use of gonfalons seems lost in antiquity. Probably best remembered is their appearance at the head of the parades of the Crusades where they presented the coats of arms of legion commanders. The gonfalons of Hofstra carry the seals of the colleges and schools of the University.

The seal of Hofstra is worked in threads of gold, silver, red, blue, and green against a background of white silk, derived from the great seal of the House of Orange-Nassau, and is at the center of the stage.

The gonfalons are displayed from left to right.

The gonfalon of Hofstra College of Liberal Arts and Sciences carries the seal of the province of Friesland, the original home of the Hofstra family. The fishtail below the seal has the colors of Hofstra, blue and gold, at the left and right, and the colors of the college, white for arts and gold for sciences, through the center.

The gonfalon of the School of Education carries the seal of the province of Groningen. The colors of Hofstra, blue and gold, trim the gonfalon, while the light blue of education is the center color.

The gonfalon of the Frank G. Zarb School of Business carries the seal of the province of Gelderland. The University colors of blue and gold trim the gonfalon, with the traditional “drab” filling the center stripe of the fishtail.

The gonfalon of the Maurice A. Deane School of Law carries the seal of Noord Brabant province, is trimmed in the University colors of blue and gold, and carries a band of purple through the center to indicate law.

The gonfalon of The Lawrence Herbert School of Communication carries the seal of the province of Arnhem. The University colors of blue and gold trim a center panel of crimson representing communication.

The gonfalon of the Donald and Barbara Zucker School of Medicine at Hofstra/Northwell carries an emblem representing the “staff of Asclepius,” the traditional symbol of medicine. It is trimmed in green to represent the discipline of medicine, and carries bands of the University’s and Northwell Health’s colors.

The gonfalon of the Fred DeMatteis School of Engineering and Applied Science carries the seal of the House of Orange-Nassau coat of arms. University colors of blue and gold trim the gonfalon. The orange center represents the degrees conferred by the school.

The gonfalon of the School of Health Professions and Human Services carries the seal of the province of Overijssel. The University colors of blue and gold trim the center panel of sage green, representing health professions and human services.

The gonfalon of the Hofstra Northwell School of Nursing and Physician Assistant Studies carries an emblem of a shield and flame to represent the professions of nursing and physician assistant studies. It is trimmed in purple to represent leadership, and carries the colors of blue, orange, red, and yellow to represent collaboration, humanism, courage, and innovation. The flame breaking through the shield embodies the break from the traditional model of education.

The gonfalon of the Peter S. Kalikow School of Government, Public Policy and International Affairs is derived from the Dutch city of The Hague, the seat of government of the Netherlands and the seat of the United Nations International Court of Justice. The words “vrede” and “recht” translate into “peace” and “justice,” the cornerstones of the Kalikow School. The center of the gonfalon includes the three branches of the U.S. government, with the crown being replaced by people, symbolizing a government “by the people.” The gonfalon was created by Peter S. Kalikow, a proud alumnus of Hofstra University.

The gonfalon of the School of Natural Sciences and Mathematics displays symbols within a shield that represent the atom, symbolizing the natural sciences; pi (π), symbolizing mathematics; and two lions, symbolizing Hofstra pride. The colors represented in the gonfalon symbolize pure reason (white), growth (green), clarity (black), and order (purple), along with the University’s traditional blue and gold.

The gonfalon of the School of Humanities, Fine and Performing Arts displays symbols within a shield that represent the key to learning, symbolizing humanities; eye and primary colors, symbolizing the visual arts; masks of comedy and tragedy placed on a musical scale, symbolizing performing arts; and lions, representing Hofstra pride. The colors represented in the fishtail symbolize the array of disciplines incorporated in the school, along with the University’s traditional blue and gold.

The Hofstra Flag and Motto

The Hofstra flag (right), bearing the seal of the University (top left and on the flag), was presented to Hofstra on April 19, 1940, by Dr. Alexander Loudon, Envoy Extraordinary and Minister Plenipotentiary, in the name of Her Majesty, Wilhelmina, Queen of the Netherlands. The seal is derived from the coat of arms of the House of Orange-Nassau. 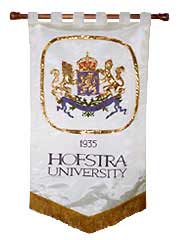 The Hofstra University Seal and Motto

The seal’s insignia is derived from the official seal of the reigning house of the Netherlands, the House of Orange, and is used with the permission of the Crown. The device is of two rampant lions in gold, tongues in red, on an azure field with gold blocks. Each lion wears a royal crown and holds a lifted sword in the right claw. In their left claws they carry a bundle of gold-headed arrows, held together with a ribbon of gold. The arrows represent the seven provinces of Holland.

At the bottom of the seal appear the words “Je maintiendray,” meaning “I stand steadfast” or “I shall stand fast,” as they do on the 1,000-year-old coat of arms of the Orange-Nassau family.

The motto and seal are reflections of the Dutch heritage of both Long Island and William S. Hofstra, for whom the University was named.