The Bachelor of Arts in Audio/Radio Production and Studies combines courses in the history and theory of the audio medium with a broad range of production-oriented courses that put an emphasis on the development, creation, marketing, and distribution of a wide variety of audio content.

The curriculum prepares students for the transformational developments occurring within traditional radio, and the rapid expansion of the many digital distribution platforms being used today, such as web-radio, podcasts, satellite radio, and smartphone apps used for audio/radio formats.

Professor Dennis Quinn and Professor Mario Murillo, chair of the RTVF Department, talk about the changes in radio, Hofstra University's Radio Production and Studies program, and the importance of the medium.

Students and faculty of the radio major speak about the Radio Production and Studies program.

What is Television in the 21st Century?

Is it that 46-inch rectangle by the couch in the living room? Or perhaps it’s watching last night’s sitcoms on your iPad? What about flipping through sports highlight videos on your smartphone? Television is a medium that has often been defined by its delivery mechanism (remember when it was called the boob tube?). Fundamentally, television is storytelling, whether informative or entertaining, that can now be thought of as a form of communicative media that transcends how it is viewed, because it’s everywhere!

In the Hofstra TV program, we prepare students for the future of the industry while establishing a solid foundation in its technical development and ever-evolving production methods. Our faculty boasts Emmy Award winners and a Fulbright Scholar, with every professor having extensive television production experience in a variety of fields. They teach not only the “how” but also the “why” in making critical decisions and aesthetic choices.

Through a variety of Bachelor of Arts and Bachelor of Science programs, we offer expert instruction in live studio production, digital graphics, professional editing software, internet media, tapeless HD cameras, scriptwriting, and critical studies. We provide an atmosphere where students can discover and develop their specific interests in order to best prepare for becoming a part of the expanding world of media known as television.

AWARD-WINNING FACULTY
Every one of our faculty members has extensive experience in the fields in which they teach, and New York City is one of the world’s greatest resources for guest instructors and lecturers.

CUTTING-EDGE TECHNOLOGY
You will work with the latest HD/UHD-4K cameras and leading editing, audio, design, and post-production software.

CHART YOUR OWN COURSE
Choose from electives that allow you to focus on directing, producing, screenwriting, cinematography, 2-D and 3-D animation, visual effects, and digital post-production.

MINUTES FROM NEW YORK CITY
Hofstra University is located 45 minutes outside of the greatest filming location in the world: New York City. This means that you have access to fantastic resources and opportunities for internships and employment.

STATE-OF-THE-ART FACILITIES
We offer three production spaces, including Studio A, a three-story, 3,750 square-foot studio, along with a newly built digital post-production suite. 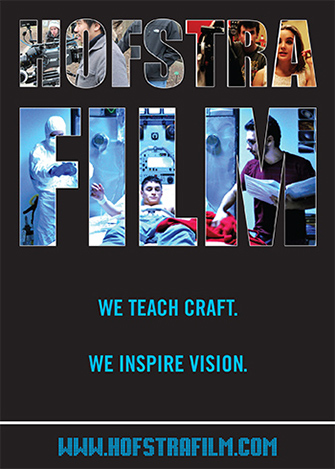 Between the Fires - Directed by Rand Smith

Learn more about the Hofstra Film program at HofstraFilm.com

Our department also offers a Minor in Radio, Television, Film requiring 18 semester hours, and is taken under advisement and with approval from the advisor.

This minor explores innovative spaces in storytelling, design-thinking, and game design. Combining courses from the Herbert School, DeMatteis School, and School of Humanities, Fine and Performing Arts, students taking this minor will use cutting-edge storytelling technologies such as Virtual Reality (VR) and Augmented Reality (AR) as well as learn to design interactive narratives for mobile and web platforms.