Prepare for a career in acting, directing, design, production, or stage management. Hofstra’s drama program will give you hands-on experience as you deepen your understanding and appreciation of the art of theater.

One of the "Top Acting Schools in New York" by DailyActor.com

The department also offers a minor in drama. The interdisciplinary minor in musical theater is by audition and includes a selection of classes from the dance program and the Department of Music.

The BA in Drama is ideal for students who want a well-rounded education in all aspects of theater, onstage or behind the scenes. With the BA, you have the freedom to double major, pursue academic-year internships, or take advantage of exciting study abroad programs.

More about the BA

Students who want to fully immerse themselves in the study of performance apply for the BFA in Performance in the fall of their sophomore year. This preprofessional track offers a wide variety of performance skills classes not available to BA students. Graduating BFA actors are featured in a New York City industry showcase for invited agents, managers, and casting directors.

More about the BFA in Performance

This degree is for students who want to specialize in an area of design (scenic, costume, lighting, or sound) directing, stage management, or technical direction. The BFA program requires students to submit a résumé and portfolio upon admission to Hofstra. By the time they graduate, BFA in Production students will have served in major roles in at least two departmental productions and will have developed a professional-level portfolio of their work.

More about the BFA in Production

Every year the department produces a full season of professional-level productions, as well as a twice-yearly student repertory of student-directed plays.

One of the highlights of the academic year is the annual Hofstra Shakespeare Festival, America’s longest continuously running Shakespeare Festival. On alternate years, the Festival is performed on the Hofstra Globe Stage. Inaugurated in spring 2017, it is the most authentic replica of Shakespeare’s Globe Theater in the United States.

Take a tour of the Hofstra Globe Stage

More on the Student Experience

Student theater clubs multiply the performance and production opportunities. Masquerade Musical Theatre Co. produces two quality musical productions a year. Spectrum Players was launched in 1959 by one of Hofstra’s most famous alumni, Francis Ford Coppola. Each semester Spectrum Players produces a main stage show, a traveling children's show, and a night of experimental works. And not to be forgotten, Tequila Mockingbird is Hofstra’s first improv troupe.

Drama faculty have outstanding credentials in performance, direction, and production. Students praise the nurturing and professional atmosphere of the department. 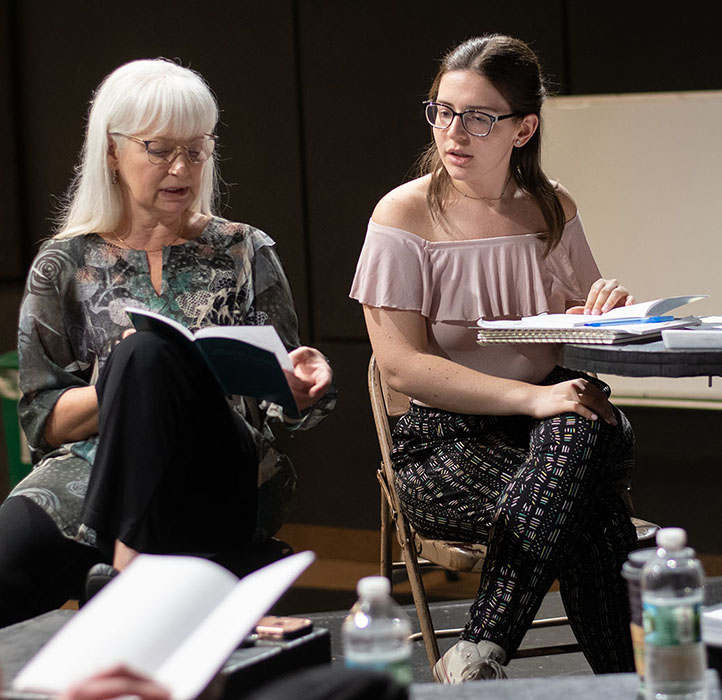 Our graduates are working on Broadway, off-Broadway, in regional theaters, in film, and on television. They include Oscar, Emmy, and Tony award-winning and nominated actors and artists. More on alumni outcomes

Examples of where recent drama alumni are working:

Where our alumni are pursuing advanced studies:

The Drama program offers grants and scholarships to incoming and continuing students.